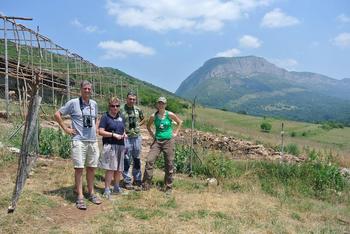 The Bulgarian Vulture restoration project helps a fellow-project in India

15.07.2015
Chris Bowden from the Royal Society for Protection of Birds (RSPB) us a Manager of the SAVE programme for rescuing the vultures of Asia, while Jemima Parry-Jones is a Director of the International Centre for Birds of Prey, as well-known author, lecturer, consultant and breeder, involved with a number of species conservation programmes.
The two experts visited three of the Griffon adaptation aviaries maintained within the Vultures Return in Bulgaria LIFE08 NAT/BG/278 Project in Vrachanski and Central Balkan and above Sliven. Their aim was to get familiar with the infrastructure, maintenance, release, tagging and tracking of vultures we have been using. In Vratsa the team had the chance to see our very first wild-born baby Griffon, hatched from birds we have released, while above Sliven we were welcomed by a Cinereous Vulture attracted by the birds kept in the aviary. We also showed our guests the Wildlife Rescue Centre of Green Balkans - Stara Zagora and obtained very valuable comments and advice on the captive breeding and care for our birds.

The visit of the experts was related to the critical situation of vultures in India, Nepal and Pakistan, where the populations of Gyps bengalensis, G. indicus and G. Tenuirostris has decreased above 99 % for the past 15 years. vultures are an integral part of the culture of local people and their mysterious mass mortality has recruited wide-scale attention and expert capacity. The riddle was revealed in 2004, when it became clear that vultures had been poisoned by an anti-inflammatory drug called Diclofenac, used for easing the pain of dying old cows. Once ingested by vultures, the drug causes kidney failure and irreparable damages, leading to the rapid and painful death of the birds. In 2006 Diclofenac was banned in India, later in Nepal and Pakistan.

It is extremely worrying that in some European countries, as well as Turkey, the use of Diclofenac is allowed and this may turn into a death penalty for our small and fragile vulture populations. This is why Green Balkans supported an international petition to ban the use of Diclofenac in veterinary practice in Europe and Bulgaria.

By 2008 there were 3 breeding centres established in India, one in Pakistan and a new centre in Nepal. They supply safe, Diclofenac-free food and breed vultures in captivity in order to use the captive-bred birds to strengthen the critically endangered wild populations. What is pending is the construction of an aviary for adaptation and release of the three species within a long-term programme for restoration, similar to the one implemented in Bulgaria.

We are extremely happy and proud to be able to share our experience and good practices with our colleagues and will follow their efforts closely, hoping on the successful return of vultures!