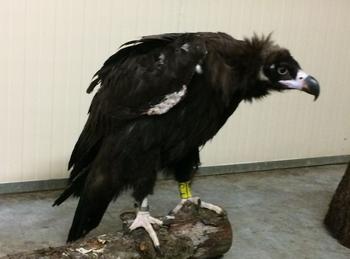 The Black vulture Barnabé has returned to his native zoo

02.03.2020
The Black vulture Barnabé was returmed to his native zoo, Parc des Oiseaux, France after three months of rehabilitation at the Green Balkans' Wildlife rehabilitation and breeding center.

The bird was donated by Parc des Oiseaux for release in Bulgaria  within project "Bright future for the Black vulture" LIFE14 NAT/BG/649, aiming to reintroduce the population of the species in Bulgaria. After he spent four months in the wild, he suffered an accident and  was rescued by our team. Due to his sattelite transmitter, we managed to locate the place of accident but unfortunately the bird was found with a broken wing. In the Center, the wing was fixed with bandage and the bird was rehabilitated. Unfortunately, the wing could not fully recover and the vulture will never be returned to the wild.

Barnabé is a bird significant for its species, so he will remain in the Black vulture recovery program and he will have the chance to breed in captivity. A few days ago he was sent to в Parc des Oiseaux, where he actually was hatched and will become part of the breeding program.

We express our gratitude to Marleen Hughe – curator of birds in Antwerp zoo - Plankendael and coordinator of the European endangered species program for the Black vulture (EBV EEP)!

Huge thanks to our colleagues from Parc des Oiseaux about their financial support for the transportation of Barnabie and for they will undertake his rearing from now on!

Also thanks to Svilen Stamatov from Bulgarian Animal Transport about his assisstance for the transport issues of the bird to France.