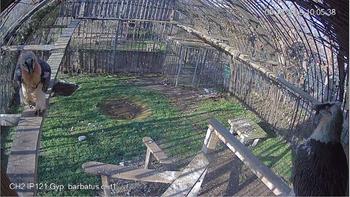 10.12.2019
After we observed the first signs of breeding behavior in the Bearded vultures at the Rescue center we are now starting to see their first copulations.

We’ve seen them preparing the nest and we’re quite sure they are ready to start their first attempts. As you know the pair first hatched successfully in 2016 and have up until now had 6 chicks, all of which have been released to support the European population of the species within the EEP (European endangered species program).

They are not the only birds from the species which are included in our breeding program, there are 4 young birds – 2 male and 2 female at the center that we hope will form successful pairs when they reach appropriate age.

This year the couple was a bit late with the first copulations, most probably because of the unusually high temperatures for the season. Now the weather is starting to stabilize and the birds are feeling it. So our team is trying to provide them the peace and calmness they will need and lets all hope for a successful  breeding season!

We’d like to thank our partners from the Vulture Conservation Foundation for their help and advice!

The Green Balkans Rescue Center information activities are implemented within: