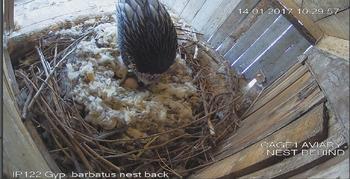 The Bearded Vultures of the Wildlife Rescue Centre of Green Balkans have laid their first egg for the year!

15.01.2017
The team of the Rescue Centre is sending off last year with some exciting news – the Bearded Vultures, which have lived in the Centre for the past 10 years, have laid an egg!

This was somewhat expected as we had seen the pair bonding and copulating towards the end of last year. Not only was the nest thoroughly arranged and re-arranged, but also we saw the female spending more and more time in it and once she prepared a whole in the wool she had previously collected, we knew that the time has come.
These are major news, as Bearded Vultures are a species considered extinct from Bulgaria. A species the team of Green Balkans has been dreaming to see roam freely back into the wild.

This is the third egg of the only pair of Bearded Vultures in Bulgaria, after last year they successfully hatched two chicks. We would like to remind you that the first baby Bearded Vulture hatched in Bulgaria for the past 60 years, named Khan, was raised by his parents and was then transported to Amneville Zoo, France. Only one chick survives in nature and this is why the second chick that hatched and was going to certainly die in the nest of its parents, was almost immediately transported to Austria, where it was adopted by a foster parent. As these were the first chicks of our pair and because of their important bloodline, our team, together with our colleagues from VCF, decided to keep both chicks within the European captive breeding programme for the species.

This year the first egg of our pair appears almost two months before the time the birds laid last year, which is a very good sign for their bonding. Despite that, the pair lags behind the other Bearded Vultures in the other specialized breeding centres and zoos within the European captive breeding programme. Our colleagues from VCF announced a total of 22 eggs laid by 16 pairs by 31.12.2016.

We are hoping on more good news about our vultures this year, promising to keep you updated!