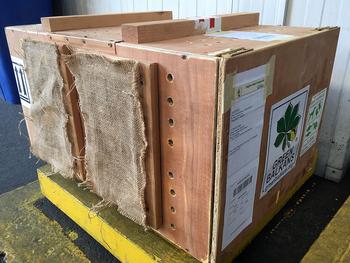 The Athens zoo has now an Egyptian Vulture pair

20.03.2019
Since yesterday the Atica Zoo in Athens has a pair of Egyptian Vultures.

"Matchmaker" of the young family was the team of the ' Egyptian Vulture NEW LIFE' project (LIFE16 NAT/BG/000874) in the Green Balkans' Wildlife Rehabilitation and Breeding Centre, whose idea was to give the male bird to the zoo.

The bird had arrived to us in 2015. It was hatched in the zoo we are partnering with in Zlin, Czech Republic the year before. It had then been placed in our "stock" aviary, where it spend its youth with 6 other birds from the species. At the beginning of 2018 we were contacted by our colleagues from the zoo in Athens asking for assistance in finding a male bird for their lone, adult female.

After consulting Anton Vidal from the Prague zoo who is in charge of the Egyprian Vultures in the EAZA system, and after coordinating with the zoo in Zlin, from yesterday our male bird has found a new home in Greece. Creating new Egyptian Vulture pairs in the EAZA system of zoos is one of the tasks of the Wildlife Rehabilitation and Breeding Centre as part of the ' Egyptian Vulture NEW LIFE' project (LIFE16 NAT/BG/000874.

We are expecting that in the future the hatchlings of these birds to be released in the wild. This way, even though their parents would be living in captivity, the offspring will be released, contributing for stabilising the fragile population of this species!

We thank Anton Vidal, our colleagues from the Zlin zoo, and our friends from Bulgarian Animal Transport for the cooperation, and hope to be able to share good news from the young family later in the year!