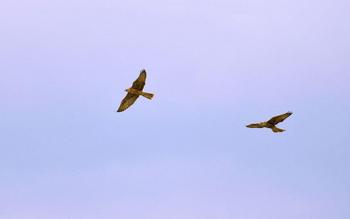 18.10.2015
This year’s breeding season for the Saker Falcon has proven to be extremely successful.
Our target was to release 20 birds, and we managed to release 19. This was the first year that we had attempted to breed and release so many.

In the breeding part of the project the most noticeable achievements were from our oldest male, who this year produced 5 chicks. For a 22 year old male this was a fantastic result. We also had our first three chicks from one of our pairs that had been together for a few years.
As for the hacking part of the project we had a new man in charge and he was able to keep the released birds in the hack area for longer than we had hoped which will get us a far better probability of them returning next year.

We chose the area of Malko Kadievo to release the Saker falcons this year. We fixed 4 hacks in trees 1-3 Km apart from each other, with the idea of keeping groups of birds independent so they can have enough prey. However, birds from all hacks ended up interacting with each other and mixing regardless of the distance, but they didn’t have problems and ended up all together.

Each bird was fitted with a large white PVC ring on the right leg with a specific code in black (i.e. 1A, 9V or 8T) and two small coloured rings in the left, one to mark the hack (i.e. green for hack 3) and one for each bird in one hack, which combined gave a specific colour id.

We had a team of 4 people (from Bulgaria, Canada, Ireland and Spain) working in the area, always at least 2 people in the fields day and night to take care that everything went fine, monitoring the birds with binoculars, telescopes, cameras fixed in the hacks and a drone. We had no incidents and everything went very well, we didn’t register any casualty among the released birds and all of them fledged without problems and ate from the tables with the rest of sakers.

The hacking period lasted for 4 months, more than we planned in the beginning, because the birds stayed near the hacking site longer than expected. The goal of using the hacking methods is to get the birds used to the area and identify it as their home, so they come back to the same area in the future. Therefore, we want them to stay in the area as long as possible to increase the chances that this happens. Our aim was to make them stay for up to 28 days after fledging (maximum period in former releases in Bulgaria was 14 days); out of our 19 birds, the one that stayed for the shortest in the area, 9V, remained there for 27 days, and at least one of the birds (5P) kept coming to the feeding table for over 80 days (!).

There were differences in behaviour among hacks; hack 4 were very active and even aggressive to each other, whereas the birds in hack 2 were very inactive and calm. The young birds were 25-30 days old when brought to the hacks, and fledged 2-3 weeks afterwards. The first bird to fledge was a male called (by chance) 1A. He left the hack and was gone for 2 days until he managed to find the way back to the hack. The youngest birds, hack 4, stayed in the release area until the end of the season, but the last bird identified was 5P, from hack 1, which is the one that stayed for over 80 days.

The "Return of the Saker Falcon in Bulgaria" performed by Green Balkans and the International Wildlife Consultants (UK) Ltd. with the support of research and conservation program of the Environment Agency - Abu Dhabi and Armeec.