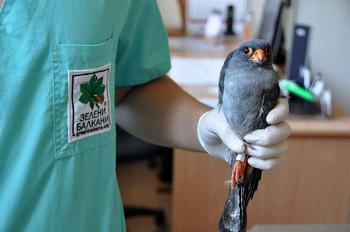 Successfully recovered Red-footed Falcon was released into the wild

24.07.2015
The bird has undergone a therapy of almost three months’ duration at Green Balkans’ Wildlife Rescue Center in Stara Zagora.

In May, a male Red-footed Falcon was received at the Rescue Center from the region of Varna with a luxation of its left wing. After the veterinarians of the Rescue Center have applied a series of therapies, the rare falcon recovered successfully and the team decided it was fit for independent living.

To make its adaptation easier, the team released the patient in the area of the Lesser Kestrel Release and Adaptation Module in the village of Levka, Sakar SPA. This location was considered appropriate because it harbors the Lesser Kestrel colony established by Green Balkans within “Lesser Kestrel Recovery” project funded by the LIFE program of the European Union.

The first flight of the falcon, after more than 3 months of treatment, showed that the bird had successfully recovered, feeling fine in the wild.