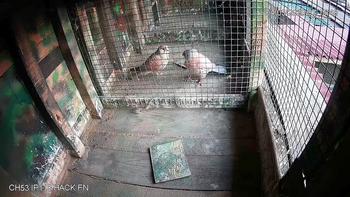 Spring on the wings of the Lesser Kestrel!

05.03.2020
At the Green Balkans Rescue Centre, the spring came with the first migratory Lesser Kestrels!

With a lot of effort, our team was able to read the rings of the birds and so, we realized that these birds were released from us in 2018!

The birds are two for now - a male and a female. They arrived the day before and since then have been inseparable.  They search for food, go around the Center and visit familiar places - the aviary in which they were hatched, the adaptation hack from which they were released and made their first flight.

We are glad that for another year we have Lesser Kestrels hatched and released at the Centre returning. We hope that soon they will become more numerous and create a colony. Most of all we expect the first hatched wild little ones which was exactly our goal. After returning this extinct species to Sakar with the successful ending of the 'Lesser Kestrel Recovery' Project we decided that with the methods used in the project we will try to create another functioning colony, this time near the Rescue Center.
After the few non-standard forerunners of spring - the Lesser Kestrels that returned from migration and came to us at the Rescue Centre our team removed their martenitsi.