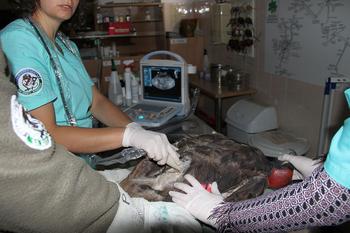 16.11.2018
On November 14th the Green Balkans’ Wildlife rehabilitation and breeding center a signal was received for a shot Golden eagle (Aquila chrysaetos) on the road between Shivachevo city and Sborishte village.

The bird was transported by the team of Green Balkans and admitted in the intensive care unit in the Wildlife rehabilitation and breeding center and the Regional inspectorate of environment and water - Stara Zagora was notified.

In the initial examination a broken leg and bloody leak from the beak of the bird were found. The echography of the bird revealed massive internal hemorrhage and the roentgenography made in the clinic of Faculty of veterinary medicine at Trakia university in the presence of Ass. Prof. Galina Simeonova, the vet team of the Rescue center concluded that the eagle was shot and two pellets were visualized in the body of the bird – one in the abdominal area and the other one in the right leg.

Signal for this violation of the law was submitted to the Regional inspectorate of environment and water – Stara Zagora and the Regional forestry directorate – Sliven on which territory the poaching took place. Our team hopes for immediate reaction of the institutions and we will gladly cooperate and support the investigation process!