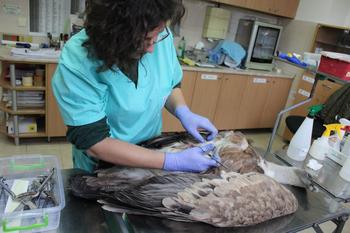 04.03.2020
For a second time this year two corpses of Griffon vultures were admitted at the Green Balkans' Wildlife rehabilitation and breeding center for identification of the cause of death.

Last week our colleagues from the Bulgarian society for the protection of birds (BSPB) got two signals for dead Griffon vultures.

The first one was discovered in the region of Malko Bryagovo villageq Eastern Rhodopes, due to the satellite transmitter attached to the bird by the team BSPB. Police officers from the Regional police department – Harmanli transported the corpse to the Rescue center for an autopsy.

After the autopsy performed by the vets team, acute poisoning is supposed and samples are collected for toxicological analysis.

The second vulture was found near an electric pylon in the region of Chomakovo village, Kardzhali. The bird was released from the aviary of our partners Fund for wild flora and fauna (FWFF) in the region of Kresna gorge within project “Bright future for the Black vulture” LIFE14 NAT/BG/649 in 2018. Subsequently, the bird has been spotted in the region of Studen kladenets dam.

The autopsy revealed that the the direct cause of death was torn aorta and the reason probably has been electrocution which have driven the bird to the ground. The corpse was with initial decay processes which would compromise the toxicological analysis.

The anti-poisoning activities are implemented within project: