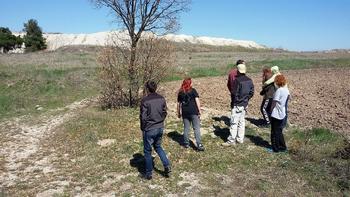 10.04.2017
On the 2 April 2017 trainees from the Green Balkans’ Wildlife Rehabilitation and Breeding Centre in Stara Zagora, from the “Student Practices” project of the MES, together with volunteers and part of the Centre’s team, visited our south neighbour, Greece. The task was to check the old and find new Lesser Kestrel colonies. Militsa Ivanova tells about the great experience.
“In April’s firs Sunday, early in the morning we set off to Greece. Our goal was to observe the known Lesser Kestrel colonies. We were hoping to, also, find new ones for the species. Several years ago, the Lesser Kestrels were extinct from Bulgaria. The Green Balkans’ Wildlife Rehabilitation and Breeding Centre team works for the “Lesser Kestrel Recovery” LIFE11 NAT/BG/360 project from the EU’s LIFE Programme, which aims to reintroduce this rare bird in Bulgaria. In our Southern neighbour, Greece, on the other hand, the Lesser Kestrel (Falco naumanni) is very common species. They nest in holes, cracks and rocks, and mainly in towns and villages, where there are suitable buildings. On the way in we say different animal species – badgers, foxes, Western marsh harriers, Hooded crows, a few Buzzards and hundreds of migrating Storks on the sandy banks we saw 9 Common Kestrels. These birds have the appearance of the Lesser Kestrel. The biggest difference is the colour of the claws, for the Common Kestrel’s claws are black, and the Lesser Kestrel’s are white. Our first stop was Kavali village. There we saw storks, buzzards, an Imperial eagle, and a male Common Kestrel. Near the cemetery, on the sandy bank, we discovered that the pair of Common Kestrels, viewed on previous activities, where not there.
The next place we stopped was Orestiada town. There, again, we saw a lot of Storks, Buzzards, and around 15 Lesser Kestrels. They were nesting around a military facility, near the local stadium. Our trip continued to Kalomokastro. On the highway, we noticed tow Black storks, Common Kestrels and around 7 Western Marsh Harriers. When we arrived at the village we say two copulating Lesser Kestrels. There was another pair nearby. In the end, there were around 20 Lesser Kestrels in the village and one Harrier. At the village centre Rusko Petrov M.D. from the Wildlife Centre’s team showed us the Lesser Kestrel nesting boxes, that Green Balkans’ team had installed a couple of weeks prior. From one of the locals we understood that the birds have already used their “new” homes.
Our next stop from the trip was Agio Teodoroi. There we split into several teams and in the end, we counted 27 Lesser Kestrels and one Harrier. Here, again, we were shown the nesting boxes installed by the “Lesser Kestrel Recovery” project’s team. Our last stop was Maronia. There we were delighted with the view to the Aegean see, we saw seagulls and many Echinozoas. We took some photos, bathe in the sea and headed back to Bulgaria.
We would like to thank Rusko Petrov M.D. and the whole Wildlife Centre team for providing us with the opportunity to get to know not only the Bulgarian nature, but also that of the neighboring countries. Thank you, also, for the knowledge that you are providing us with, telling us about every species of birds that we are seeing on the way” ends her tale Militsa.