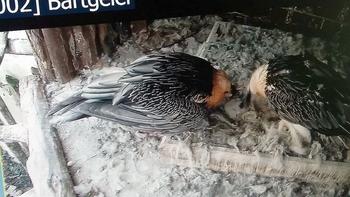 16.03.2018
Schonnbrunn Zoo has become the second home of a Bearded Vulture hosted at the Wildlife Rescue Centre of Green Balkans.

The chick is the second baby for the year of the pair of Bearded Vultures, kept at the Centre. It hatched in the incubator of the Wildlife Rescue Centre like its elder sibling, but was not brought back to its parents. The reason is that both in nature and in captivity, only one of the offspring survives.

This is why we had to urgently find a home for the baby. This is where our colleagues and consultants on rearing Bearded Vultures from VCF stepped in. The pair selected as foster parents did not manage to hatch own chicks this year but are very experienced in adopting and rearing chicks.

The road to Schonnbrunn was very difficult, the transport was almost impossible, yet friends and helpers make everything possible! This is how 10 days after hatching, the baby Bearded Vulture found its new family.

Dr. Hans Frey from VCF was expecting us in Vienna and together we went to the zoo. Almost immediately after it was placed in the nest, the chick was visited by the male and a bit later by the female also. They were sitting on an artificial egg as they had broken their own egg and all of a sudden this egg had turned into a chick! Fortunately, the pair immediately proceeded to brood and feed the baby. Its faith will depend on its sex and on the overall success of the Bearded Vulture captive breeding programme, coordinated by VCF. If it turns out a male, the chick may be kept for captive breeding, if it is a female, it is very likely to be released within one of the ongoing Bearded Vultures restoration projects running in Europe. In any case we will keep you updated!

This is how yet another mission impossible ended well. We are grateful to all who helped us, some of them known, others not!

In such moments we feel happy and filled with energy, enthusiasm and willingness to work hard, as we know that together we will always find a way, even in the most difficult situation!