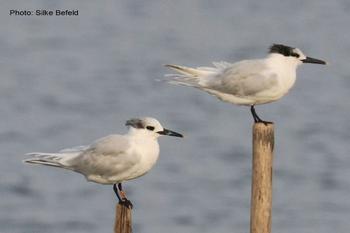 21.02.2018
With approaching end of winter, we have noticed that numbers of Sandwich terns (Sterna sandvicensis) at Pomorie Lake is going up and today 6 more have joined the three that spent whole winter here. That gave us reason to share last news we got regarding observations of Sandwich terns from Pomorie Lake on the coast of the Mediterranean Sea.

First we shall tell you the story of Sandwich tern carrying green plastic ring with white inscription CPK, hatched at Pomorie Lake in 2012 and ringed on 26 June same year. Next sighting of that bird was registered by Vincenzo Cavaliere next summer at Foce Regi Lagni, Castelvolturno, Caserta, Italy on 15, 16, 18 and 22.07.2013. Following winter, the tern was observed again on the Western coast of Italy but further north at Torre Di Foce Verde, Latina by Fabio Pinos on 09.02.2014. In the end of summer same year on 20.08.2014 the bird was seen back home at the wooden sticks in front of Pomorie Lake visitor centre. Last observation we were informed about by our Italian colleagues was last winter - on 13 and 14.2.2017 at Castel Fusano - Roma, Italy by Massimo Biondi and Riccardo De
Santis. Obviously, this bird has shown preference for Italy’s western coast!

Other bird showing interesting connection between Pomorie Lake and Adriatic Sea is a Sandwich tern marked with orange plastic ring with black code CPD – also hatched in 2012 and ringed on 26 June. Initially we got information for several observations of that bird on the Adriatic coast of Montenegro at the border with Albania – in the Bojana River Delta – in the spring: 19 March and 7 April 2013 and 4 March 2014. Afterwards the tern enjoyed a trip back to its home and was seen at Pomorie Lake on 5 September 2014. Afterwards a long pause was recorded in observations lasting more than 2 years until its next sighting in a well-known area and season: 16 March 2017 again at Bojana River Delta in Montenegro on border with Albania. All these sightings were made by Milan Ruzic. Travels until today finish with observation on Adriatic coast of Italy on 7 December 2017 T Martinsicuro, Teramo by Dimitri Marrone.

Last addition to the list of ringed Sandwich terns that have been observed was another tern from class of 2012 tagged with an orange ring with black writing CNN. After more than 5 years without anby news on its fortunes in the end of last year we got good news it is alive and well being observed at one of the emblematic reserves in Europe – Camargue on the Southern French coast at the Rhone Delta. Mrs Silke Befeld – scientific expert of the reserve – has observed and photographed the bird on 2 November at one of main lagoons - Vaccarès.

We remind you that Pomorie Lake hosts one of the largest colonies in the Southeastern Europe of Sandwich terns – protected species that is flagship for the saline Pomorie lagoon. Thanks to the long -term efforts of Green Balkans volunteers for improving the nesting condtions numbers of breeding pairs jumped from 6 in 1996 to more than 2000 in 2013 and 2015. The colour ringing program was pilot for Bulgaria and thanks to it we learned about the long-distance travels of these elegant birds reaching Israel, Greece, Italy, Spain, Tunisia and Canary Islands.

We wish to thank to all observers for the provided information and photos!