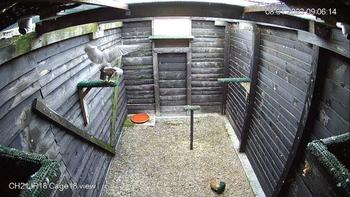 Saker falcons Orpheus and Eurydice gave the start of the breeding season for the species at the Wildlife Rehabilitation and Breeding Centre - Green Balkans!

10.01.2023
In the very beginning of the new year, good news came from the Wildlife Rehabilitation and Breeding Centre.

Orpheus and Eurydice are part of our saker breeding group. They are a pair which has already reared hundreds of falcons flying freely in the skies of Bulgaria.

Just a few days ago, the Centre's team observed the first copulation of the year - the family that started the breeding season was Orpheus and Eurydice!

An interesting fact is that in 2022 they were again the first to do so!

Meanwhile, we are observing breeding behaviour in some of our other saker falcons pairs. We expect good news from them as well very soon!

We remind you that a total of 11 breeding pairs of saker falcons are residing in the Wildlife Rehabilitation and Breeding Centre of Green Balkans. Every year, for more than ten years now, we release their offspring in the wild with the aim of restoring the population of the species in the country.

Last year, for example, we released a total of 25 young birds.

In 2018, thanks to the efforts of Green Balkans, the first breeding pair of the species in the country was confirmed after decades of no such record, and by 2022 we already have two certain pairs and a total of three known saker territories!

The project “Saker Falcon Reintroduction in Bulgaria” is funded by the Mohamed Bin Zayed Raptor Conservation Fund and Armeec JSC.