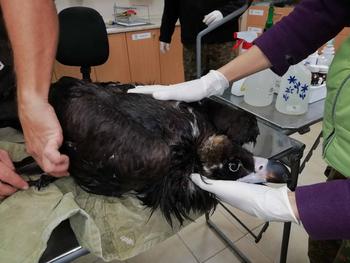 26.11.2019
The black vulture, Barnabie, released by the Green Balkans team near Kotel in August through the hacking method was found today near the village of Svirkovo, Simeonovgrad.

Barnabie, Ultron and Ostrava-2 were released in Bulgaria within the ‘Bright Future for the Black Vulture’ LIFE14 NAT/BG/649 project and were closely monitored after their release. During the last few days the Green Balkans team received somewhat worrying data through the birds’ satellite transmitters – the young vultures spent a long time on the same place, probably in distress.

One of them, Barnabie, spent the whole night in a vineyard and after a field check our team captured the bird and transported it to the Green Balkans Rescue Center in Stara Zagora, where the vets discovered the bird had three fractures on its right wing. The good news is that the bird’s overall condition is good, its weight is not critical so we are hopeful it will recover fast.

After a short stay at the intensive care unit, the bird will be sent for an operation at the veterinary clinic at the Trakia University, Stara Zagora by a team of specialists.

We will monitor the data from the other two birds and our team will be ready to react in case they need help.