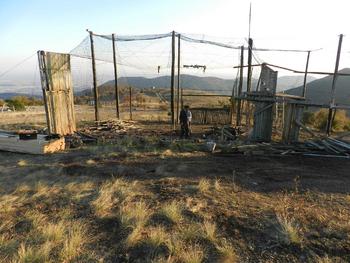 01.11.2018
One of the most important activities of the field team of Green Balkans for the last month was the reconstruction of the adaptation aviary for vultures, which is on the territory of Sinite kamani Nature Park.
Constructed ten years ago, passed through the challenges of the harsh high-mountain weather, the aviary needs overall reconstruction to become a safe and convenient shelter for the vultures during the adaptation period. 21 Griffon vultures were living in the cage before the reconstruction, which are now moved to the Green Balkans’ Wildlife rehabilitation and breeding center. They’ve already spent one month in the center and after about a week they will be returned to the newly reconstructed cage. The need for reconstruction appeared when our team found out that the aviary has already decayed and has partially fallen down. Besides the reconstruction of the main wooden construction, new perches were installed and a pool with water, in order to make the aviary suitable for Black vultures, because half of the Black vultures from the aviary in the region of Kotel will be moved to the same aviary at the same time along with the Griffon vultures. The vultures in Kotel are the first 12 Black vultures to have been imported in Bulgaria within the project for reintroduction of the species in May from Extramadura, Spain and will be released in the spring by the soft-release method. They will spend the winter in the aviary in Sliven along with the Griffon vultures in order to achieve successful adaptation and to establish a colony after release.

The reconstruction works of the aviary are carried out within the project ‘Bright future for the Black vulture’ LIFE 14 Nat/BG/639.