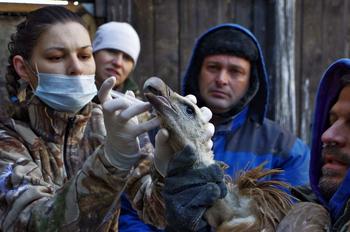 13.01.2015
All birds were examined, treated against parasites and tagged with special wing tags and rings, to allow us to identify them into the wild. The vultures, which come from Spain, were traditionally marked with yellow tags with black letters. This is the last batch of vultures, shipped within the Vultures Return in Bulgaria LIFE Project.

Purvolet (First Flight) is however special - our first baby hatched and raised by a pair of captive Griffon Vultures kept at the Wildlife Rescue Centre of Green Balkans - Stara Zagora. Since he is of Bulgarian origin and so we could identify him from the rest, Purvolet got a green ring and a blue wing tag with a yellow inscription B65 (B is the letter chosen to represent Bulgaria).
He hatched on April 29th 2014, but in August he left his nest, as he exceeded the hospitality of his caring parents and they chased him off.

Since December 2014, Purvloet has been the leader of the group of 34 new Griffon Vultures, which arrived from Spain. We hope that they would teach him to behave as a wild vulture, find food and tear off the tick skin and bones.
After a month together, it is time for all the vultures to be forwarded to their last stop on the way to freedom - the special adaptation aviaries in the Balkan Mountains and the Kresna Gorge. They will have several months to adapt and get to know the vultures already released and will then be set free.

We are wishing them best of luck and we are keeping our fingers crossed for our favourite Purvolet!