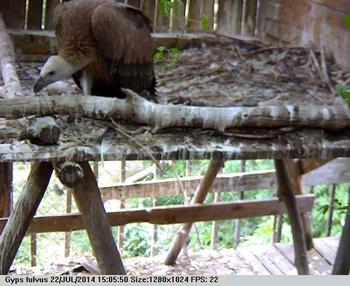 18.08.2014
At three months and a half, our first Griffon Vulture, hatched in the Wildlife Rescue Centre at Green Balkans - Stara Zagora, finally fledged!

Purvloet hatched on April 29th, and since then has been very well taken care of by its loving parents. Griffon Vultures take turns in warming ad feeding their only chick, offering it regurgitated food and constantly fitting the nest so that it is comfortable for the baby.

The vulture was named Purvolet (First Flight) by the friends and followers of Green Balkans, who voted in an online query. The last few days, Purvolet spent on the edge of his nest, constantly screaming for attention.

As tender as they are, it seems that the patience of vultures also has limits so three months and a half later, Purvolet is already out! In order to secure maximum rest for the exhausted parents, we have moved Purvolet in a nearby aviary. The young vulture was carefully examined, ringed and microchipped. We also collected feather samples, so we could finally determine if it is a male or a female!

The youngster will join the Vultures Return in Bulgaria LIFE08 NAT/BG/278 Project and will be released in the Balkan Mountains not earlier than next spring, together with older, more experienced vultures.
We will keep you posted on the progress of Purvloet!