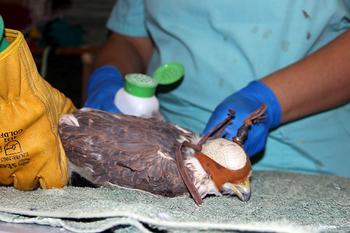 Prophylaxis of the Saker falcons at the Rescue Centre

21.10.2021
Traditionally, after the end of the breeding season and before the beginning of winter, in the middle of autumn, the Green Balkans' Rescue Centre's team conducts prophylaxis of all permanent residents of the Centre.

Today was the turn of the second part of the group of falcons, after in early September we were able to review the rest.

And this time our veterinarians did a great job, examining, weighing and deworming each of the birds.

Apart from the fact that some of them needed trim of their beaks and claws, fortunately, no other bird problems were found.

Assistants to veterinary specialists were Veterinary medicine students from the Trakia University, participants in the 'Student Internships - Phase 2' project of the MES, funded by the Operational Program 'Science and Education for Smart Growth', co-financed by the European Social Fund.

And while the vets did their job, the rest of our team used the absence of the birds in the aviaries to clean, disinfect and repair them. To be ready - clean and cosy for the coming winter.