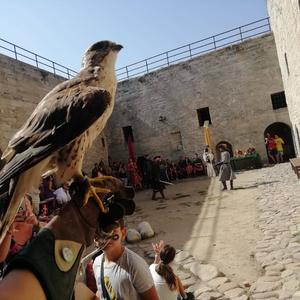 09.09.2022
At the end of August, the Green Balkans Rescue Center for Wild Animals, at the invitation of the municipality of Vidin, took part in the Medieval Festival "Budin", which was held at the Baba Vida fortress.

The "Life for Falcon" project, in which Green Balkans is a partner, was also part of the festival's program. In front of the gathered crowd, we told about how amazing birds the Saker falcons are, as well as about our work on the return of this species that disappeared until a few years ago from the nature of Bulgaria. During the presentations we were also helped by the rescue center's pets - Romeo the Saker falcon, Vladko the Common kestrel and Misho the Commmon buzzard.

An important part of the discussion was the clarification that with the development of ecology as a science, man's passion for domesticating and subduing birds of prey transitions into a deeper understanding of their importance as part of the ecosystem and subsequently leads to a drive for their conservation. Attention was paid to the threats to the species in the wild, the ban on falconry in Bulgaria, as well as the legal requirements regarding the ownership of birds.

The project "Securing the recovery of the endangered Saker Falcon in Bulgaria and Southern Romania" (LIFE20 NAT/BG/001162) is of 5 years duration and received funding from the LIFE Programme of the European Union.