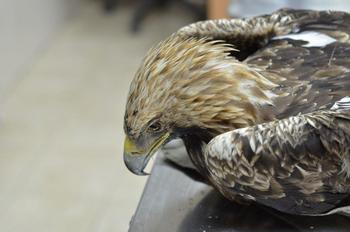 04.09.2014
The Imperial Eagle (Aquila heliaca) was admitted to Green Balkans’ Wildlife Rescue Centre on August 30th in critical condition, as the clinical symptoms were typical of carbamate poisoning.

A bit earlier that day, the eagle was found helpless by local people in the region of Sakar. The bird was found near the carcass of a farm animal, clearly showing signs of purposeful use of poison.

The carcass was ripped open; its bowels were spread out with clearly visible traces of powder sprinkled on the organs. All flies and their larvae near this area were dead, while the insects found on other parts of the body where no chemical was spread were alive – conclusive evidence of chemical poisoning. The use of a chemical agent for poisoning was also evident from the fact that a paper pack of chemicals was found near the carcass. All this makes the experts believe that the carcass was treated with the chemicals and used deliberately as bait for terrestrial predators. Unfortunately, the Imperial Eagle also fell victim to this crime.

The local people, who had found the helpless Imperial Eagle, immediately sent a signal to Green Balkans. A representative of “Lesser Kestrel Recovery” LIFE11 NAT/BG/360 implemented by Green Balkans in Sakar responded immediately. As a result of the timely reaction of the conservationists, the rare bird was transported to the Rescue Center and its life was saved. For several days now, the Imperial Eagle has been recovering in the intensive care aviary of the Center, but it cannot be said yet that the life of the bird is out of danger.

We remind that the use of poisons and the encroachment upon protected species is a crime. In this regard, Green Balkans informed the competent institutions.

Green Balkans’ activities for the study and conservation of Imperial Eagle are implemented with the support of EuroNatur Foundation.