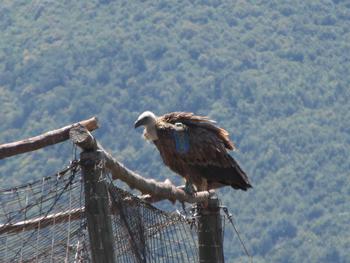 16.08.2019
The Griffon Vulture named Parvolet, an emblematic bird for Green Balkans and the Wildlife Rehabilitation and Breeding Center, is already released and is now getting familiar with the Balkan Mountains from above, the mountain regions of Sliven and Kotel in particular.

Parvolet was hatched at the Green Balkans Wildlife Rehabilitation and Breeding Center in the winter of 2014. After being carefully cared for by his parents, he was housed in a vulture adaptation aviary at “Sinite kamani” Nature Park. We installed a blue wing mark and a plastic ring (B65) so that the vulture could get an identity and be easily recognized.

The vulture spent several years in the “Sinite kamani” Nature Park adapting to the harsh mountain conditions, together with other birds of its species, as well as the wild birds freely roaming in the area.

On July 21 this year, the long awaited moment came - Parvolet was released. Together with two other Griffon Vultures - one of which donated to Bulgaria by Zlin Zoo (Czech Republic) and the other imported from Spain, flew into the sky above Sliven and thus Parvolet was not alone in its first days of freedom. The release was preceded by the placement of two young Black vultures in an artificial nest, a "Bright Future for Black Vulture" LIFE14 NAT/BG/649 project activity.

Our hero wanders in the Eastern Balkan Mountains between the “Sinite kamani” Nature Park and mountain region of Kotel now, in search of food and unfamiliar territories. We wish Parvolet a crosswind and a long life in the wild, where plenty of hazards await the vultures!