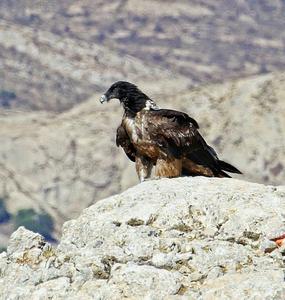 Our Bearded Vulture, hatched this year, is flying free!

22.11.2017
The Bearded Vulture hatched in 2017 by the pair kept at the Green Balkans Wildlife Rescue Centre in Bulgaria is flying free in… Spain! See him here!

Do you remember the Bearded Vulture which hatched this year at the Green Balkans Wildlife Rescue Centre of Green Balkans by the only pair of the species in Bulgaria? This was the third chick of the proud parents, which are included in the Endangered Species Programme (EEP) of the European Association of Zoos and Aquaria (EAZA), coordinated by the Vulture Conservation Foundation (VCF). In 2017 the entire EEP produced a total of 27 chicks, 18 of which were released into the wild in France, Corsica, Spain and Switzerland.

To our greatest pride and joy, our baby was among the youngs destined for release. On June 8th 2017, at an age of almost 90 days, he was accommodated in an artificial nest in the Natural Park of Castril, Granada, Spain. The vulture was named Caracol by our colleagues from Fundación Gypaetus and tagged with a satellite transmitter.

We have just received our first photos and movement data of Caracol. He is alive, well and flying free in the skies of Andalucia.

We would like to cordially thank our colleagues from Fundación Gypaetus for their care and the information they shared and we will keep you posted!

Good luck, Caracol! We hope that some days your brothers and sisters also conquer the skies of Bulgaria!