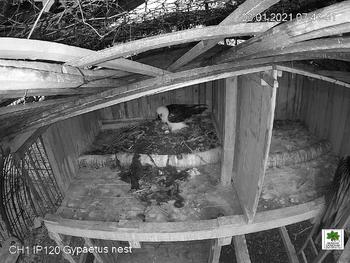 On New Year’s Eve the Bearded vultures at the Green Balkans Rescue Centre laid an egg!

After the Griffon vultures at the Rescue Centre laid an egg on Christmas Eve, on the day of New Year’s Eve their bearded cousins didn’t miss the chance to keep up with them!

Our team, however, found this important news only today when we “caught” the egg on our cameras.
And so, there began the great expectation. Normally, 10 days after the first egg is laid, there is a second one to follow.

Whether the same will happen this year, we are to find out pretty soon.
We wish to remind you that the Bearded vultures couple at the Green Balkans Rescue Centre is the only one breeding in
Bulgaria. It has been donated to the Centre within the project for rare species of the European Association of Zoos and Aquariums (EAZA), in the Vulture Conservation Foundation (VCF). The vultures hatchlings from all the couples within the program, including ours, will be released  at the program’s activity regions!