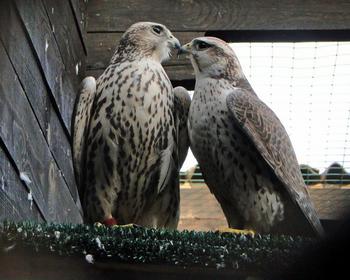 Now is the beginning of the breeding season at the Rescue Centre for the Saker Falcons.

11.02.2015
And while some are still taking thier first steps to unite the families by handling fresh food and frequent monitoring. Three of the couples have already started with the first copulations of the year.

At the Green Balkans Rescue Centre we currently have eight pairs of Saker Falcons. Two of them are young and were only formed last year while the rest have now been with us for three years.
No-one was surprised that the first pair this year to get started  were Romeo and Juliet. Romeo, at 21 years old, is the oldest of our birds.
Another of our pairs, Adam and Eve, were among the first pairs to be actively included in the breeding program and  gave us our first chick and have been our most successful pair to date.

The Green Balkans Rescue Centre has been included the Saker Falcon Reintroduction program since it first took delivery of Saker Falcons for breeding in 2010.
Since that time we have raised 20 chicks with last year being our most successful year so far.

This year we have set an even higher goal that we believe we can reach with the experience accumulated over the years and our high standard of professionalism from the project team and our partners.

Here are the projections of the team of the "Return of the Saker Falcon in Bulgaria" for the coming breeding season:

As early as next week we hope to  have the first egg laid;
The first chick will hatch 32 days from the laying of the first egg;
Our target is a minimum of 20 chicks for release.

We will continue to monitor and promptly inform you about whether our expectations are met.

We are confident that the team at the Green Balkans Rescue Centre can accept this challenge and will use all their expertise, knowledge and skills so that we can once again see the Saker Falcon flying in the skies over Bulgaria.

The "Return of the Saker Falcon in Bulgaria" performed by Green Balkans and the International Wildlife Consultants (UK) Ltd. with the support of research and conservation program of Environment Agency - Abu Dhabi and Armeec.