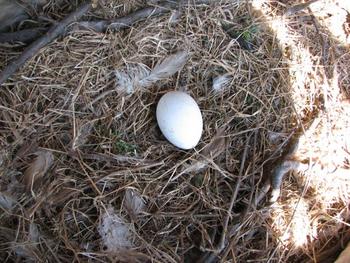 29.01.2018
Second species of vultures, inhabitants of the Green Balkan's Wildlife rehabilitation and breeding center has laid an egg.
After the Bearded vultures pair in the center has opened the breeding season in the beginning of the year, the first egg appeared in the Griffon vultures' nest just a few days ago.

It is their first egg since last year, when the pair was formed. Unfortunately, during our daily observations via the cameras in the cage our team didn't witness any copulations.

Nevertheless, we decided to leave the egg, for which the mother was mainly taking care of, in case we need to foster a wild Griffon baby which, unfortunately, was the case last year when a great number of Griffon vultures was poisoned in the region of Kresna.

And yet, we are happy to add one more species to the number of rare and endangered species breeding in the Center. We hope that despite the unsuccessful attempt this year, this will only be the beginning of the long and very successful family life of the pair.