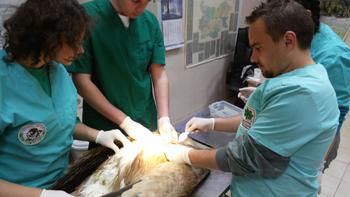 30.03.2018
New cases of dead Griffon vulture and Black vulture were registered in Rhodope mountains in March. The reasons about the two cases of death of rare birds in the Greek and Bulgarian parts of Eastern Rhodope are in process of investigation.

In the beginning of March near the border of Dadia National park in Greece the corpse of a young Black vulture was found. It was Helena, whose story we have been tracking since last year via GPS transmitter.
Thanks to the transmitter we managed to witness interesing moments from the life of the vulture. For example its distant travels to the Carpatnian mountains in Romania. Unfrotunatelly, this time the news for Helena is not good.

Data from the transmitter show that the vulture haven't been moving for hours which is a signal for problems with the condition of the bird. Team from the park directorate together with the Greek anti-poison team of WWF Greece – Ela and the specially trained dog Kiko visited the region in search of Helena. The team came across extremely rough terrain and searched the area of the last coordinates of the bird. Thanks to its considerable experience in finding dead animals Kiko managed to smell and find the corpse of Helena under a tree which has been used by the birds for rest. According to the veterinarians who have authopsied the bird, the cause ofdeath most probably is poisoning. Samples have been sent to specialized laboratory, which will confirm the causes of Helena's death.

Meanwhile in Bulgarian part of Eastern Rhodopes a corpse of an adult Griffon vulture was found near one of the nesting colonies of the species. The Anti-poison team of Bulgarian society for protection of birds – Nikolai and Bars the dog, found the dead vulture in one of their regular patrols in the region. The vulture was found near old corpse of a cow, which aroused doubts for poisoning. Information from birds with transmitters reports that other birds have also been feeding on the same place a few days ago but they all are alive and keep on incubating in their nests. Because the team of BSPB suspects a crime they submitted signal to the police and RIEW, which responded back and initiated investigation.

The corpse of the vulture was transported to the Wilflife rehabilitation center – Green Balkans in Stara Zagora where an authopsy was made and samples were taken for analysis. The expert veterinarians who have made the authopsy discovered hemorrhages in the large intestine of the vulture, which might be the cause of the dead.
The first laboratory analysis reveals no poisoning. In addition the second sample was sent to laborartory abroad. The case is still under investigation and the results from the second sample are expected for determination of poisonous substances.

The use of poison baits is illegal and prosecuted by law. Poison baits are dangerous not only for the vultures, they can also cause the death of wild and domestic animals and even people. Some poisonous substances remain in the soil for a long period of time and thus thay may affect people.

Text and photos by Bulgarian society for protection of birds.

The analysis and the authopsies of the poisoned vultures made in the Wildlife rehabilitation and breeding center – green Balkans ar part of: