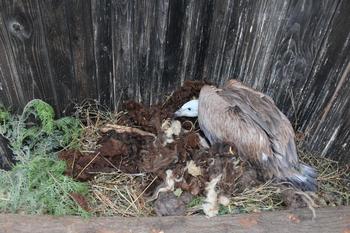 Mrak, the Griffon Vulture, is placed in a separate aviary now

01.05.2021
Mrak, the Griffon Vulture hatched two months ago in the Green Balkans’ Wildlife Rescue and Breeding Center is in a separate spacious aviary at its own disposal.

As he is already three months old and almost fledged like an adult bird, it’s time for him to spread wings and make his first tries to fly. That’s why it was necessary for the young vulture to be transferred into a bigger aviary corresponding his age and size.

The next phase of its maturity will be accommodation in an adaptation aviary in the wild and releasing the bird into the wild nature.

We remind you that Mrak was recently adopted by donators who gave him this remarkable name showing this way their love and interest to vultures’ species.
Contacts: