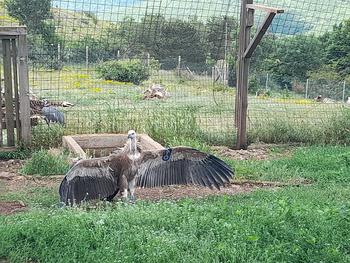 Mrak, the Griffon Vulture hatched at the Green Balkans’ Wildlife Rescue and Breeding Center, was accommodated in the Sinite kamani NP aviary

16.06.2021
The four-month-old Griffon Vulture Mrak, hatched at the Green Balkans’ Wildlife Rescue and Breeding Center, was accommodated in an adaptation aviary in Sinite kamani Nature Park.
Mrak is the first of the two Griffon vulture baby chicks who were hatched in the Center this year. After being successfully raised by his parents, than started feeding himself and living in a separate aviary, now it’s time for Mrak to start his adaptation to the wild. In the adaptation aviary, the young vulture along with other Griffon and Black vultures will spend time needed for adaptation before to be released.
In order to be easily identified among all other vultures, we put him identification rings and wing-tags. His health status was also tested by the vet team from the Wildlife Rescue and Breeding Center of Green Balkans.
More 2 wild captured Griffon Vultures were also tagged. One of them was equipped with a satellite transmitter and this way will become part of the activities of BalkanDetox LIFE project. A DNA sample for sex determination was taken from the vulture. Blood samples for biochemical analysis were taken from all Griffon Vultures in order to evaluate more precisely their health status.

The “Bright Future for Black Vulture” LIFE14 NAT/BG/649 project team together with volunteers made basic cleaning of the aviary to improve the living conditions for Mrak and other vultures living there.

We remind you that Mrak was named by Mr. Kostadin Darzhanov and his family within our Become a Black Vulture Patron program for which we would like to express our sincere gratitude!