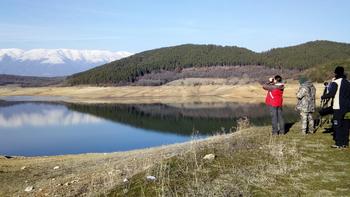 The Midwinter Waterfowl Census has been conducted in almost all European states since 1967 under the coordination of Wetlands International. The census is aimed at determining the numbers of the European populations of waterfowl, as well as at assessing the state of the wetlands where they spend the winter. Such monitoring schemes contribute to the monitoring of general changes of the environment, as well as of their impact on humans and biodiversity alike.

Teams from Green Balkans, Bulgarian Society for the Protection of Birds, Fund for Wild Flora and Fauna, Regional Inspectorates of Environment and Water, the Central Balkan National Park Directorate, the Bulgarian Ornithological Center at the Institute of Zoology at the Bulgarian Academy of Sciences, Hunting and Fishing Associations and Organizations took part in the international census.

The Green Balkans and BSPB teams in Plovdiv visited the dams north of the city, observing little over 4 thousand mallard ducks, a white-tailed eagle, smews and a few geese at the Pyasachnik dam. While at the Domlyan dam they saw mandarin ducks.

Our colleagues in Burgas - Stanimira Deleva, Stela-Teodora Trendafilova and Konstantin Popov carried out the census at the Vaya, Mandra and Atanasovsko lakes. They also had to carry out an unexpected rescue action after finding an exhausted young great white pelican, that after coordinating the efforts with the Green Balkans Wildlife Rescue and Rehabilitation Center was transported to Stara Zagora.

Equally interesting was the census in Northeast Bulgaria where our colleagues observed more than 800 red-breasted geese around Shabla.

Smews, ferruginous ducks, eurasian spoonbills and geese were registered at the Ovcharitsa dam, while white-headed ducks, greater scaups and common goldeneyes were seen at the Pomorie lake.

A big thank you to all colleagues and friends who took part and shared their information from the Midwinter Waterfowl Census.

We would also like to thank our friends Ivan Georgiev and Stanimira Deleva for the wonderful photos.