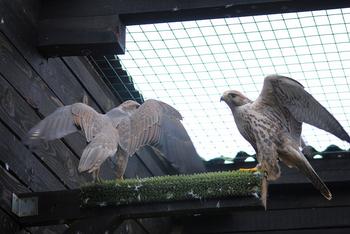 05.02.2019
Pizho and Penda, Dobri and Valna, Adam and Eve, DJ and Willow - those are the names of the couples here at the Green Balkans Wildlife Rehabilitation and Breeding Center in Stara Zagora. Those are the birds whose efforts have made the saker falcon’s reintroduction in our country possible!

And since it is February - the month of love and wine, our birds can also feel the powerful urges of love! Four pairs have started displaying courtship behavior. What do we mean by that?

Well, falcons remain in pairs within the whole year, spending most of it not really noticing their partner. All that changes at the beginning of the spring every year, when suddenly all they see is love. The males start first - courting the female, bringing her food, readjusting the nest, perking around the female, trying to get closer on the perch. The females are usually not so enthusiastic in the beginning but soon start warming up to the male’s efforts.