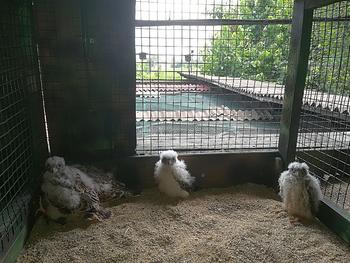 19.06.2018
The past days have been filled with good and interesting news about Lesser Kestrels in the Rescue Center and Green Balkans.
A total of 23 young Kestrels hatched at the Rescue Center this year were marked. 12 of them travelled to the village of Levka, Sakar, where they were placed in an adaptation aviary (hack), and 11 chicks were released via the hack at the Center.
On the day of their placement the presence and screaming of young birds immediately attracted six adult wild birds, monitored by our team for some time, released last year through the same aviary and returning to the "native" colony after a long wintering trop south. Birds curiously peered into the cages of the young chicks responding to their calls.
There are totally 48 hatched Lesser kestrels in the Green Balkans Rescue Center this year. They will be tagged and released in the wild.
We recall that for the first time in the history of Bulgarian nature conservation, thanks to the efforts of Green Balkans and the activities in the 5-year project "Recovery of the Lesser Kestrel" LIFE11 NAT/BG/360, the species has returned to Bulgaria after almost 30 years absence from our nature.