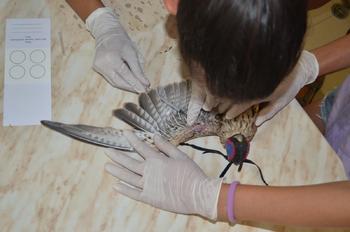 Lesser Kestrels from Sakar – part of an international DNA study

11.08.2016
Lesser Kestrels from Sakar – part of an international DNA study

The study is part of a research, that is carried out by the Greek biologists Anastasios Bunas, working on a paper “Filogeography and conservational genetics of the Balkan Lesser Kestrel”.

The research is done in the Molecular Ecology and Conservation Genetics Lab in the Ioannina University Greece.

During the past week the “Lesser Kestrel Recovery” LIFE11 NAT/BG/360 project team from Green Balkans in Levka village, succeeded in capturing a young Lesser Kestrel. A specialized team of veterinarians from the Wildlife Rehabilitation and Breeding Centre in Stara Zagora, was quick on the spot to perform the manipulations and to draw blood. The Lesser Kestrel, target of the study, is a zero years old female of unknown origin. The only sure information for her origin, that we know of certain is that she is not from the Levka colony.

The bird was caught in one of the release boxes for young birds, during the Lesser Kestrel Release and Adaptation Module’s daily monitoring. After the young Lesser Kestrel was sampled, she received identification rings, the name Polly, and an exit to freedom.