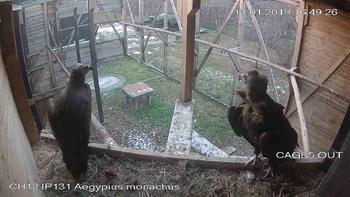 17.01.2019
The new Black vulture Keyo, which has recently arrived from the Netherlands, is finally with his partner Cherna. We hope they will actively join the breeding program and will give the beginning of the nesting of the species back in Bulgaria, though still captive bred.

The breeding season of the vultures in the Wildlife rehabilitation and breeding center was opened by the Bearded vultures as they laid the first egg for the season. The Griffon vultures also started making attempts for nesting and copulations. The situation with the Black vultures is not clear yet, as the birds were put together two weeks ago. Currently the birds show no aggressive behavior and it looks they are still getting used to each other.

And last, but not least are the Egyptian vultures which successfully bred last year and they produced one chick for the first time and this year we set our hopes on them.

Our team is enthusiastic about the current events and we hope all the species of vultures will lay eggs this year and eventually hatch chicks.