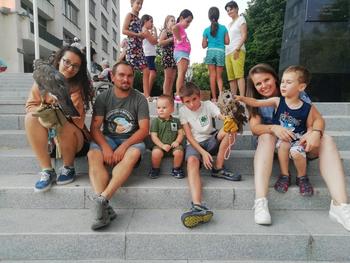 The event was opened with the releasing of three young Common Kestrels, raised in the Green Balkans Wildlife Rescue Centre. The birds successfully made their first flight in the sky of Stara Zagora – their new home.

Our new assistants again were Chara the Tawny Owl, Blaga the Little Owl and Misho the Common buzzard, birds with permanent disabilities, which stayed at the Centre, but with important mission.

The interactive puzzles about the vultures with information, real life models of the Black and the Griffon vulture, the Red-breasted goose, the Sandwich Tern and the Lesser Kestrels were small part of the Green Balkans programme.