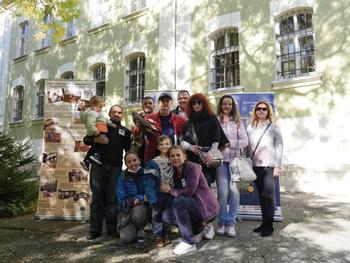 The day started in “Stoyan Zaimov” High school where we met with first graders, afterwards we continued the event together with children from the kinder garden in the yard of the museum. There were more and more children from several schools in Pleven.

A presentation for bats, curious facts – related with echolocation and hibernation, bat exhibition,  prize quizzes  - these were  only a small part of the surprises for the children in Pleven.  Information was provided from children to children, there were  workshops on the flying mammals, more prize quizzes and a lot of laughing. In this sunny day a bunch of positive emotions has filled the yard of the museum.

Our guests were also a team from Edoardo Miroglio , Svistov  who took part in the International Bat Night in Pleven.

There was a surprise by the Wildlife Rehabilitation and Breeding Center too: Their dwellers Chara The  Tawny Owl  and Misho The Common Buzzard were also guests of the event. Colleagues from the Wildlife Rehabilitation and Breeding Center brought Misho and Chara in order to acquaint the children with their destiny – to tell more about these rare species, how they have got into the center and why it is necessary to stay living there. Misho and Chara are trained “ambassadors” of ours, telling about their secret life in the nature, touching the children easier than everyone else. Misho and Chara are one of many birds with disabilities, who wouldn’t survive if were released, that’s why they stayed with us and became part of our big and wild family.

We would like to thank the Regional History Museum in Pleven for its great hospitability and especially to Rumianka Baleva – “Nature” Department Manager!

This year 2021 we celebrate 25 years Bat Night in Europe and 30 years  Agreement on the Conservation of Populations of European Bats.

About the initiative:
We owe the initiative for celebrating the event to EUROBATS secretariat.
Celebrated  for the first time 25 years ago, today The European Bat Night is organized in more than 30 countries, among them Bulgaria. In 2012 USA, the Philippines, Azerbaijan, Israel, Tunisia, Ukraine and Lebanon joined the event as well. Due to this fact, the Bat Night became an international act, going beyond the scope of the “Old continent”, which aims to raise the public awareness about the importance of the most interesting species on the planet, as well as to introduce more people to the unique way of bat’s life. Usually the countries from Western Europe celebrate The Bat Night in the last weekend of August, but in Bulgaria the students are yet in vacation. That’s why we wait them to return in the classrooms and after 15th of September the Information campaign will begin.

Green Balkan is a member of BatLife Europe international organization with the support of KFFOE (Austrian Coordination Centre for Bat Conservation and Research).

Bats
33 of all 35 bats species in Europe are to be seen in Bulgaria and they are of key importance for the ecosystems. All of them are protected under the Biodiversity Law and forest and underground habitats of species are protected zones within the Natura 2000 ecological network.

The events organized by Green Balkans for celebrating the International Bat Night are part of the project „Natura 2000 in Bulgaria – New Horizons”.