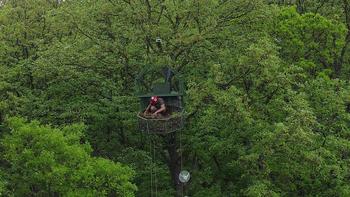 Intensive preparations are underway for the upcoming field season, within the "Reintroduction of the Saker falcon in Bulgaria" project!

03.05.2022
At the end of April and the beginning of May, the field experts on the project "Reintroduction of the Saker falcon in Bulgaria" prepared all four adaptation aviaries (hacks) in the field for the upcoming release of young Saker falcons hatched at the Green Balkans Rescue Center in 2022.

The work of our team was not easy. We installed nesting material and an "elevator" for remote food delivery and inspected and repaired the aviaries. Branches obscuring the nearby solar panels powering the video surveillance cameras in the hacks were also removed. They will allow the team to remotely monitor how the birds are adapting, which will complement field observations.

And all of this in the branches of oak trees, at a height of about 10 meters, placed to resemble natural nests for the species.

Now we have to accommodate the young falcons there as well. This will happen in mid-May. Then, for 3-4 months, they will be provided with food twice a day by the field team, while the birds adapt to the area, and learn to fly and hunt on their own.

During the preparation of the aviaries, a pheasant, two European honey buzzards and a hedgehog were released, which were successfully treated at the Rescue Center.

The "Reintroduction of the Saker Falcon in Bulgaria" project is funded by the Mohamed Bin Zayed Raptor Conservation Fund and Armeec JSC.