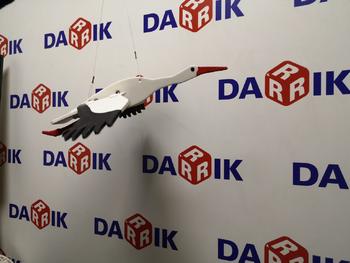 How to help storks in winter

11.12.2018
This Monday our colleague from Plovdiv, Aneliya Pavlova, along with Dr. Hristina Klisurova from the Green Balkans Wildlife Rehabilitation and Breeding Center in Stara Zagora visited the Darik Radio offices where they took part in the Darik for Nature rubric.

The reason we chose this theme is the Green Balkans donor campaign part of the ‘Giving Tuesday’ initiative. We would like to remind you that our team is collecting funds for the Belozem – European Stork Village cleaning campaign for cleaning up the stork nests in the village. The DMS campaign is still active, you can send a 1 lev donation with a DMS PROLET text message to 17 777. The campaign aims at cleaning up old rubbish gathered into the storks’ nests that baby storks often get tangled into. You can find more information here: https://dmsbg.com/11264/dms-prolet-spasenie-za-belite-shtarkelcheta/

We also told the radio presenter, Gergana Gaydarova, and all of the Darik Radio listeners about the storks’ biology and their migration as well as about all threats they face along their way.

At the end of the program Dr. Klisurova told us how to react if we spot a white stork during the winter. We should not assume the bird necessarily needs help as storks often find enough food during the winter. You can learn more about storks and listen to the show in the link below:
https://darikradio.bg/za-starkelite-s-lubov.html

We would like to thank Darik Radio for the good partnership within the ‘NATURA 2000 in Bulgaria - NEW HORIZONS’ LIFE17 GIE/BG/000371 project
Contacts:
Aneliya Pavlova – 0899269576
apavlova@greenbalkans.org