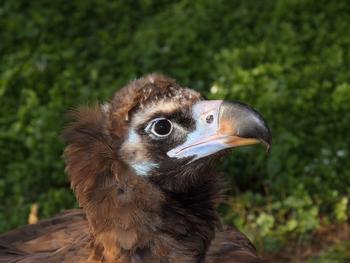 How many of you have loved without being loved back

This is the story of a couple of Black Vultures from the Wildlife Rescue and Rehabilitation Centre in Stara Zagora and our effort to give our female bird a new chance for offspring…Because these are the only birds in the species to live in captivity in Bulgaria and our chance of bringing back this wildlife species into our country!

The female bird, called Cherna (Blacky), was sent to the Green Balkans’ Rescue Centre in 2011 and in 2014 the male joined her in the breeding program. We named it De Doue, after the zoo that send it to us. For the four years of being together the couple couldn’t produce any offspring and were never observed to copulate. During the breeding season Cherna was actively showing reproductive behavior towards De Doue, clearly demonstrating her affection for the male bird, unfortunately her feelings were not mirrored by De Doue. After trying different courtship techniques, the female approaches were not answered by the male vulture. One probable reason for the couple’s failure at producing offspring is that De Doue suffered wing damage which hampers his ability to copulate with the female.

One thing is certain, Cherna is ready to take care of the family nest and this motivates us to give her that chance. For the second year in a row the female bird lays eggs, unfortunately, they are not fertilized, as her affections for the male remain unanswered.

Although finding a suitable partner for Black Vultures is a hard job, due to their low population numbers in Europe, our team has been leading intensified negotiations with our colleagues from the European Endangered Species Programme. Finally we succeeded, we found the right bird and our colleagues from the Dutch zoo, Ouwehands Dierenpark Rhenen, will send it to us. Unfortunately, we need 1000 euro, we do not have, which is why we are starting a fundraising campaign.

The zoos is a member of the European Endangered species program for this species which is run by the European Association of Zoos and Aquaria (EAZA).