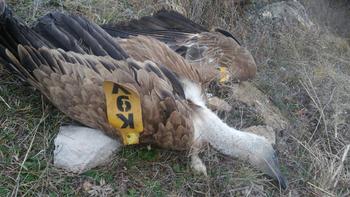 Hazardous power lines near Kotel killed another one Griffon vulture

18.12.2017
On December 1st after signal by a civilian, the corpse of a Griffon vulture was found in the region of Kotel city. A member of the Bright future for the Black vulture LIFE14 NAT/BG/649 project from the Wild Flora and Fauna Fund, immediately responded to the signal, who unfortunatelly confirmed that the bird was from the rare species.

The vulture was found near one of the power line routes, which was assessed as extremely hazardous for the raptors in the area. The bird has a fracture of the left shoulder bone, which is a direct cause of the dead. Most probably the fracture was caused by a collision with the power lines. This is the fifth bird killed by the hazardous power line route...

By the markings of the bird – a ring and wing tags with number K9V it was found out that the bird was released on April 23rd 2016 near the village of Dolno Ozirovo and it was observed in March 2017 in Vrachanski balkan Nature Park for the last time, it has been regularly observed on the feeding site in the city of Kotel. The bird has been brought from Spain as part of the species reintroduction in the Central Balkan, which is a cooperation of Green Balkans, Wild Flora and Fauna Fund and the Society for protection of birds of prey. Unfortunately, the unsafequard power lines turned out to be one of the main threats for the reintroduction of the species.

The team of the LIFE14 NAT/BG/64 project will prepare a signal to EVN and the respective institutions, demanding saefguarding of the hazardous route and we are able to contribute with supply of the equipment necessary for safeguardintg of the electric poles as well as with support from our stuff, consultations and in all the ways possible.