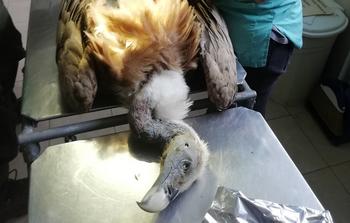 The Green Balkans’ Wildlife rehabilitation and breeding center succeeded in confirming the harm that lead pellets cause to the wild birds. The evidence is a Griffon vulture found dead, shot by poachers.

Our colleagues from the Bulgarian society for the protection of birds found the corpse of the dead bird near Studen kladenets dam, Eastern Rhodope mountain. A few years ago, during a preventive medical check-up of the bird, blood sample has been collected, which revealed increased concentration of lead in the blood.

The anti-poisoning team suspected that lead poisoning might be the cause of the dead, so they transported the corpse to the Wildlife rehabilitation and breeding center, where the veterinarians made radiography and collected liver and bone samples from the dead bird. The results reveal that there are gunshot pellets in the corpse, which have caused slow and sure release and deposition of lead in the body.

The analysis made clear that years after the crime has been committed, the bird had died by lead poisoning. This is the first confirmed lead poisoning case in Bulgaria, which is evidence that the long-time efforts for capacity building in wildlife anti-poisoning management finally give results.

The anti-poisoning activity is part of project: