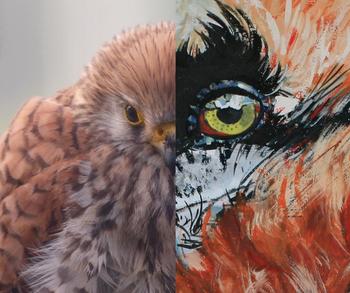 24.09.2016
The Green Belt day – 24.09.2016, will be marked for the first time in Levka village (Svilengrad municipality) by the opening of an exhibition that includes different specimens of fine art. The place was chosen in random! Levka village is placed in Sakar mountain, it falls in the Balkan Green Belt area. In the last few years the village, situated near the border with Greece and Turkey, became popular not only for tis good wine, and the cultural and historical monuments scattered in the vicinity, but also for the successful application of the Lesser Kestrel (Falco naumanni) reintroduction programme, carried out by Green Balkans implemented by the European Union’s LIFE programme.

The name of the event – “Exhibition in a Barn” unites more than sixteen different authors from all over Bulgaria, working in different spheres of the fine arts – painting, pencil drawing, sculpture, drawing, modern visual arts etc.

The main idea of the event is to popularise the Balkan Green Belt, some emblematic species from Sakar’s ornithological fauna, as well as the problems, that threaten their existence. The aim of the initiative is to attract, inspire and unite more young people of art and science, that will cooperate in the discovery and popularisation of problems threatening Bulgarian nature. The event is an attempt to “deliver culture” to the rural area, by sending the art forms outside their normal habitat – the art gallery.

This initiative is part of the combined project between BBF, Green Balkans, and EuroNature (Germany) to popularise the European Green Belt.