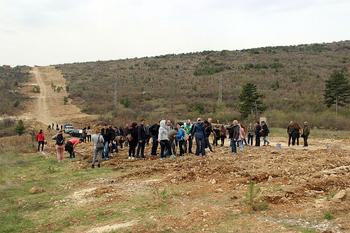 Green Balkans team participates in afforestation in the vicinity of Stara Zagora!

07.04.2022
The initiative was organized by the Regional Forestry Directorate - Stara Zagora and the Territorial Forestry Department Stara Zagora.
The event was also attended by representatives of the Stara Zagora Municipality, Stara Zagora Regional Administration, media, the State Forestry, the Fire Department, as well as several cultural institutions in the town, as well as volunteers of the Rescue Centre, students from the Thracian University.
Part of the volunteers participating in the afforestation were scouts from France who are currently helping at the Wildlife Rescue Centre.
Green Balkans' participation in such initiatives has become a tradition. We would like to thank the Regional Forest Directorate of Stara Zagora for being among the participants in the reforestation action this year. For us it was a wonderful and useful experience.