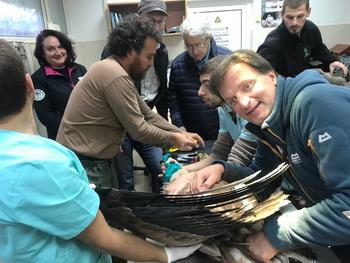 25.10.2017
Two new vultures were donated to Green Balkans by the German Allwetterzoo Münster and Tierpark Goerlitz to join the programme for the restoration of Griffon and Black Vulture in Bulgaria.

This is yet another donation from Allwetterzoo Münster which as already sent to us a total of 6 vultures hatched in their zoo since 2010.
The two birds were transported on a regular passenger flight of Lufthansa and were accompanied by Dr. Dirk Wewers, curator of Allwetterzoo Münster, the main person behind the sending of the previous birds and by Mr. Matthias Reinschmidt, director of Karlsruher Zoo. The transport of the birds, their initial examination at the Wildlife Rescue Centre of Green Balkans in Stara Zagora, their tagging and accommodation in a vulture adaptation aviary were shot by a TV crew of the German DOCMA TV – Mr. Christian Ehrlich – a biologist and producer of films for animals, Mr. Lars Schwellnus, Mr. Matthias Bozelec – cameraman and sound-editor.

The television crew was accompanied by Mr. Frank Elstner – among the most famous presenters of German television, a long-term anchor of the TV programme “Wetten, dass..?”, now devoted on nature conservation.

The two newly arrived vultures are youngsters, hatched in the two zoos this year. The bird originating from Allwetterzoo Münster, called Lars, was tagged with a Bulgarian ring and a wing tag inscribed BM2, while the other vulture coming from Tierpark Goerlitz was tagged BM3. After some time of adaptation in the aviary in the Sinite kamani Nature Park the two vultures will be released within the Vultures Back to LIFE14 NAT/BG/649 Project. This way they will not only help strengthen the population of Griffon Vultures in the country but will also assist us achieve our next goal – restore the nesting population of Black Vulture!

We would like to cordially thank our German colleagues and friends, for their trust and contribution to our efforts to bring vultures back!