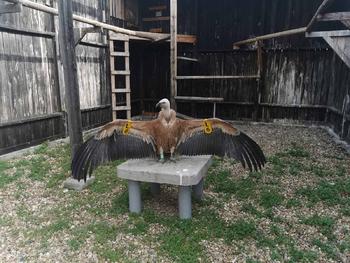 Green Balkans received a donation from the Dutch zoo Dierenrijk

11.02.2021
On February 9, 2021, Green Balkans received a Griffon Vulture as a donation. The donation is from the Dutch zoo Dierenrijk, which for years has been supporting the activities for the restoration of large vultures in Bulgaria.

This is the third bird that was hatched and raised by the zoo team and received as a donation for the reintroduction of vultures in our country.

The Dutch Zoo is part of the European Association of Zoos and Aquariums (EASZA), which actively supports programs to restore rare species in the wild.

The bird will spend a period of quarantine in the Green Balkans’ Wildlife Rescue Center, after which it will be placed in the aviary for adaptation in the „Sinite Kamani“ Nature Park.

We would like to take this opportunity to thank the Dierenrijk Zoo, as well as the Stichting Wildlife Foundation, which implements activities together with the zoo and also supports the activities for the protection of vultures in Bulgaria through donations. We are honored that the Dutch public has a vote of confidence in us and supports our activities.

Follow the fate of the bird named Stanislav, on our site and „keep your fingers crossed“ that it will successfully adapt to life in the wild.