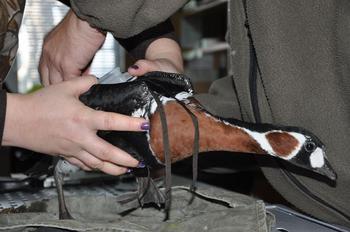 16.02.2015
The team of Green Balkans marked with a satellite transmitter a Red-breasted goose – one of the rarest species in Bulgaria and on Earth as a whole. This will give a chance to the environmentalists to follow the migration of the bird towards the Russian tundra…
The bird on which the transmitter was put was released at the Durankulak Lake after almost a year of captivity spent in the Wildlife Rescue Center in Stara Zagora. Here some details of the story of this bird...

The Red-breasted goose was illegally kept in a private house in the town of Kavarna, where the people cut the bird’s flight feathers preventing it from flying. On 19 February 2014, the bird was taken away and transported to the Wildlife Rescue Center by the Bulgarian Society for the Protection of Birds.  It was impossible to release the bird in the winter of 2014 as it was necessary to wait at least several months until its flight feathers regenerate.  That is why the bird was kept at the Rescue Center. After long months of gentle care the bird managed to recover completely. The medical checks in January 2015 showed that it is in excellent condition and is ready to be released.

The bird was marked both with a satellite transmitter and with the standard metal rings. This will give a chance to the environmentalists to follow its migration back to the Tundra. The transmitter sends the birds location coordinates at every 8 hours. This allows to make a rather accurate mapping of its migration and to gather precious information necessary for more effective protection of the species.  So far the transmitter has helped to the environmentalists to know that the goose has joined a flock of other geese at the Lake Durankulak. It spends the night in the water and feeds in the vicinity of the lake during the day.

The story of the marked bird is almost the same as the story in the children’s book issued by Green Balkans last year. The name of the goose in the book is Brent - that is why the marked goose was also named Brent. In the book Brent managed to fly more than 6000 kilometer from the Russian tundra to Bulgaria where he faced many dangerous challenges (just as the real Red-breasted goose Brent). Both in the fictional story and in the real story of Brent, the goose was saved by environmentalists who took care of it and after a while released it back in the wild hoping it will fly back to its home place in Siberia.

We hope that the bird will successfully adapt to the conditions in the wild and will let us gather precious information about its migration. Keep your fingers crossed for Brent and follow its story here!