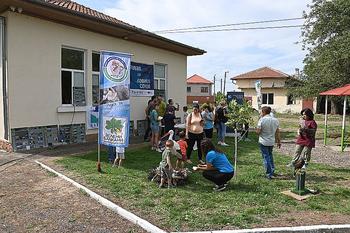 21.09.2022
The fifth edition of the Saker Falcon Festival was held on September 17, 2022, and the host of the event, which has become a tradition, was once again the village of Malko Kadievo.

Several events took place within the framework of the festival, organized as part of the "Life for Falcons" project, funded by the LIFE program of the European Union. The most attractive of them was the release of six Common kestrels, treated at the Rescue Center.

A special corner for children, on the other hand, gave the young environmentalists from the village and the region the opportunity to learn more about the Saker falcon and the Green Balkans activities on its restoration in the nature of Bulgaria. And the prizes prepared for the participants in our activities were an additional incentive for young and old to take part.

At that time, in the village's lobby of the "Mityo Stanev 1929" Elementary School, a series of films were projected for the more curious, the highlight of which was again the occasion for our celebration - the Saker falcon.

All present were able to touch these magical birds, thanks to the presence of Romeo - a male Saker falcon, formerly part of the breeding flock at the Rescue Center, now retired to a well-deserved rest. Along with him, the festival was attended by Vladko the Common kestrel, Blaga the Little owl, as well as Harry the Harri's hawk from the Rescue Center.

The congratulatory concert, performed by the community centre in Malko Kadievo and their friends, further contributed to the good mood of the guests at the event.

We thank our volunteers, the students of veterinary medicine from the Trakia University, and our colleagues from the Green Balkans "Natura 2000 - New Horizons" project, as well as our symbolic hosts from Malko Kadievo for their assistance in organizing and holding the festival.

The project "Securing the recovery of the endangered Saker Falcon in Bulgaria and Southern Romania" (LIFE20 NAT/BG/001162) is of 5 years duration and received funding from the LIFE Programme of the European Union.