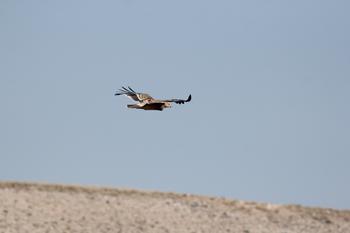 12.10.2021
Do you remember that in early September a Green Balkans' team, in the presence of the media, released a young Imperial eagle in the area of ​​the village of Kamen, Sliven region?

We are happy to share with you the news that the bird is alive and well, and proof of this are the photos that our Turkish colleagues took of it, near Ankara!

We remind you that the bird was rescued by the Green Balkans team earlier this year, during the regular monitoring of the nests of the Imperial Eagles.

After a short stay at the Wildlife Rescue Center, under the care of veterinarians there, the young eagle was released into the wild. Before that, however, thanks to our colleagues from the Bulgarian Society for the Protection of Birds, the eagle was equipped with a satellite transmitter, through which we monitor its life in the wild.

We wish the young bird a fair wind and hope to receive such good news from it.

And when he reaches the age when he will start a family, we expect him here again.