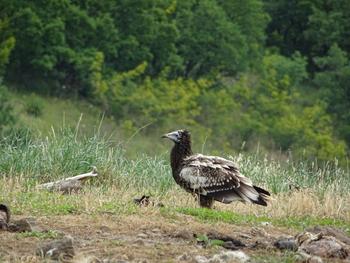 29.05.2018
~On May 16, two days after the tagging with satellite transmitters of the four young Egyptian vultures from the adaptation aviary in the Eastern Rhodopes, the door to sky and wildlife was already open. The first one who dared to leave the aviary was the most dominant vulture of the four birds, named Polya like the name of the girl, who observed and fed them for the last few months. After Polya, Akaga, the subdominant vulture, took off and the third – Boyana followed her. The next morning, the aviary left Pantaley-Jerez, who arrived from the zoo in Jerez and joined the other three birds two weeks later.

The first days the vultures spent in the area of ​​release, learning the art of flying and how to use the air thermals to raise height, coping with the attacks of other bird species. On May 19, Polya for the first time dared to feed on the feeding station. You can see video from her first meal in the wild here.


The only vulture that made a long walk was Akaga. On the 20th of May she left the area of ​​the aviary and the next two days she explored the Eastern Rhodopes and traveled about 200 km.

On May 22, Akaga returned and immediately landed to eat at the place that young birds like to use for rest near the site. On that day, Boyana and Pantaley-Jerez also eat there. The team put food there to make them eat because they had not landed on the feeding station for nearly a week. A few days later, Boyana was the first bird that followed the example of Polya and landed to eat at the station. You can see her here. On May 27, all the vultures started eating at the feeding station.

Since the release, none of the birds have returned to the aviary. 10 days after their release, the vultures are already confidently coping with wildlife, eating, flying skillfully, choosing suitable and inaccessible places to stay, and coping with the moods of other birds in the area - Griffon, Black, Egyptian Vultures, Black Kite and Crows.

For nearly two months, birds were preparing for wildlife in a special adaptation aviary. The four birds were granted to the “Egyptian vulture New LIFE” project from the zoos in Schonnbrunn, Prague and Jerez. This is a pilot experience in Bulgaria for releasing into the wild of captive-bred Egyptian vultures by the delayed release method (the vultures are one year old). Similar method has been successfully applied for years in Israel. This approach relies on the assumption that the birds have enough time to gain living experience in finding food and to enter into good fitness before taking on the challenging migration to the South.

The activity is carried out by a team of BSPB and Green Balkans under the LIFE project "Egyptian Vulture New LIFE" LIFE16 NAT/BG/000874, which brings together institutions and organizations from 14 countries spanning the Balkans, Middle East and Africa. The four young Egyptian Vultures have been donated to the project with the assistance of Anton Vaidl - coordinator of the European Endangered Species Programmes (EEP) of the European Association of Zoos and Aquaria (EAZA), and with the assistance of VCF.