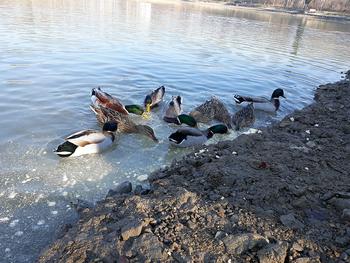 Freeing Mallards in the Zagorka lake

The ducklings are the last to hatch in the Rescue Centre for this year!

As some of you may remember, some days ago a mother with seven newly hatched ducklings was rescued.
The duck was saved from the winter cold by our friends from Sport Fishing Club – Stara Zagora.

The campaign today was more of a gesture of goodwill. And as good parents do, we left some food for our flock that will keep their bellies full until they get used to their new home.

Volunteers of the Centre, citizens, and regional media were at the event.